Last week our design team headed off to the 6th annual Graphic Design Festival Scotland to hear from pioneers in the industry at the TopForm conference and panel discussion.

One of the biggest design events in Glasgow, the Graphic Design Festival Scotland (GDFS) focuses on collaboration and encourages designers attending to share insight into their craft with others. In just 5 years it’s grown from 60 attendees in the first year to 1,900 in 2019.

Despite only lasting one day, the TopForm conference at the festival saw a raft of talks from large digital media and broadcasting companies like VICE to industry giants such as Stefan Sagmeister.

We’re thrilled to have been able to hear such great and interesting talks from some of the biggest and most iconic names in the industry today, and have left the event feeling inspired and eager to push the boundaries of design. Here are some of the best talks we saw on the day.

Kicking off the conference was G.F Smith, one of the most recognisable paper distributers in creative and fashion industries and D&AD Black Pencil winners - the most prestigious D&AD award you can win - for Brand Expression in 2015.

After showcasing some of their great work, including art installations in Hull made entirely out of paper, G.F Smith’s Paul Scharf gave attendees insight into their initiatives in sustainability. In the UK alone, less than 1% of all paper cups are being recycled; with around 7 million cups being used in a day across the UK, G.F Smith created their new range of paper, ‘Extract’, by recycling coffee cups into high-quality paper. Partnering with CupCycling, they’ve created a “zero waste process” with aims to expand beyond coffee cups and reclaiming other kinds of paper waste.

Given the nature of their industry, we were inspired both by their commitment to sustainability and their innovative and out-of-the-box approach to a significant problem.

Her enthusiasm for her craft and her mantra of “be stupidly confident!” really resonated with us; having her talk through how she developed her own style and how she tried pushing the boundaries of design inspired us to think about our own time as designers, our journey and our inspirations behind the work we do. We’re always excited to see someone so passionate about their craft showcase how they go about it and sharing their process with the wider community! 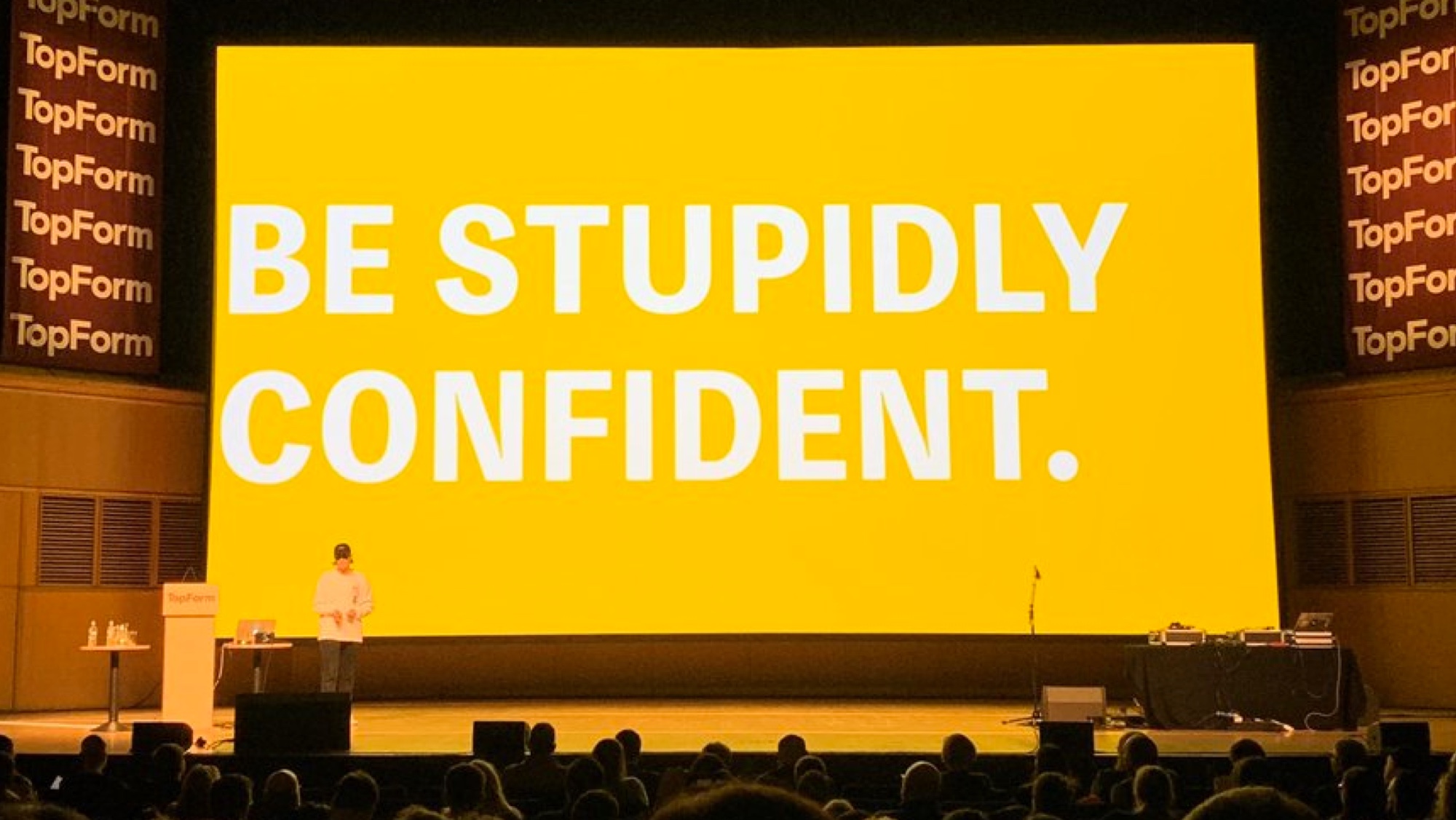 Probably the most eccentric talk of the day came from Eike König of Hort. Coming on stage to the music of Kraftwerk, König talked through his design principles and approach in his unique and informal presentation style.

As founder and director of leading Berlin-based creative studio Hort, Konig talked about the studio’s work on the redesign of the Bauhaus identity and his role as a mentor and teacher to the next generation of designers. Much of König’s talk focused on the responsibility we have as designers and the ethical questions we must ask ourselves when taking on work. ‘Whatever we do will come back to us’.

The world’s largest independently-owned design studio, Pentagram’s branding work is recognised worldwide, having worked across industries from Warner Bros. in entertainment to Moss Bros. in fashion. With such an incredible portfolio of work, it was a real treat to hear them talk about the variety of their work and their processes.

The talk, by Angus Hyland, partner at Pentagram, focused on 3 of their projects: a cover for a book on Martin Luther King Jr, the logo redesigns for Discovery’s Eurosports channel and a personal painting project. Hyland walked through each project step by step, showcasing the design concepts behind them such as using the rule of thirds, the golden ratio, and grid structures. With such a heavy emphasis on their creative process, it was great to see how much thought and care went into each project, and how much effort they put into keeping things simple and minimalistic - a challenge more difficult than people realise!

Our favourite talk was definitely Stefan Sagmeister’s talk on how the statement “beauty is in the eye of the beholder” is wrong. Controversial, we know. However, research seems to agree with him, from the fact cavemen shaped symmetrical tools for no reason other than a pleasing aesthetic, to studies with dementia patients the showed we all recognise a universal ‘beauty’.

The main point made in the talk was challenging the idea of “Form follows function”, where beauty is considered cumbersome and the focus should purely be on functionality. Sagmeister challenged this, asking why do we have to sacrifice one for the other? It’s not about choosing beauty or functionality and sacrificing the other, it’s not about creating something simple instead of something complicated; it’s about choosing to be thoughtful about your design.

““If you are designing with love and care, you will naturally think about function. You will see detail and symmetry. You will consider what is useful or what is pleasing aesthetically. You will determine what is excessive. You will see what’s right. [...] If we care about what we’re making, we will make beautiful things.””

Using examples of complaint trackers created for Grand Central and for Penn Station, Sagmeister showcased how Grand Central - famed for its design and beauty - was designed with love and care, and resulted in a platform that was more interesting and aesthetically pleasing, without losing any of the functionality or accessibility that Penn Station’s equivalent had. 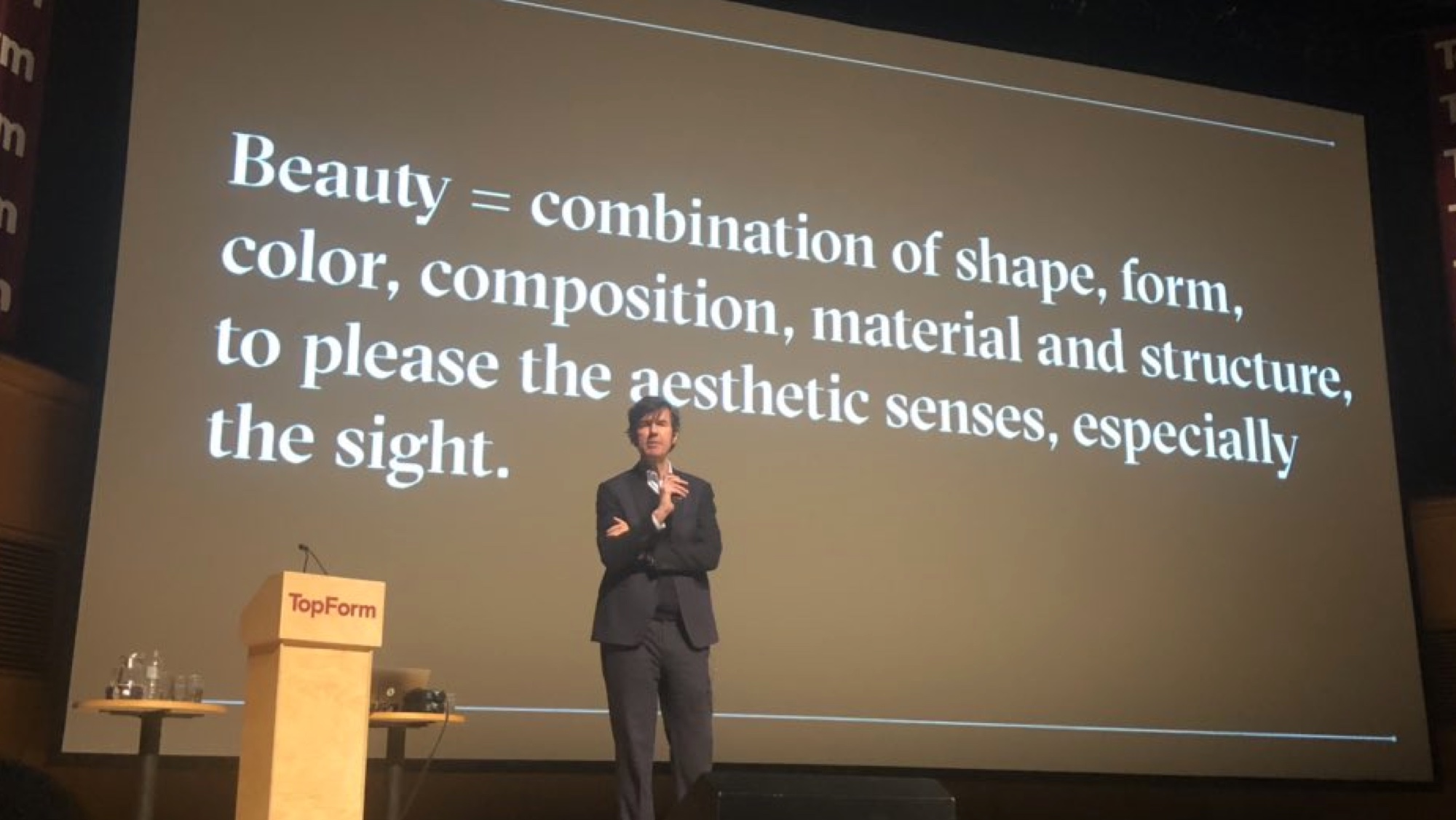 As advocates of excellent UX matched with beautiful design, we fully support the idea that great functionality doesn’t have to come at the cost of more ‘boring’ design. It’s something that shows throughout our work, and we strive to make every piece of design we create as beautiful as they can be without sacrificing on UX.

We’d like to thank the organisers and speakers of the event; it was an amazing opportunity and we’ve left the event inspired to challenge the norm and design the future. We can’t wait for next year’s conference!

If you want to hear more about our approach to design, or how we can help you with our creative services, get in touch! We’d love to hear from you. 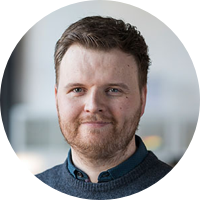