We've been working with voice interaction since 2016, before the launch of either the Amazon Echo or Google Home in the UK. In that time we've been searching for voice-first gatherings and events, and Voice Connected Home 2019 in Cologne, Germany was the largest we've attended yet.

Kicked off by Alexa Technical Evangelist Benoit Nachawati, the two-day event focused on two different streams - 'Connected Living - Reaching the User' and 'Customer Experience - Meeting User Needs', with talks by a mix of both major bluechip brands and agencies supporting them in exploring the voice space. 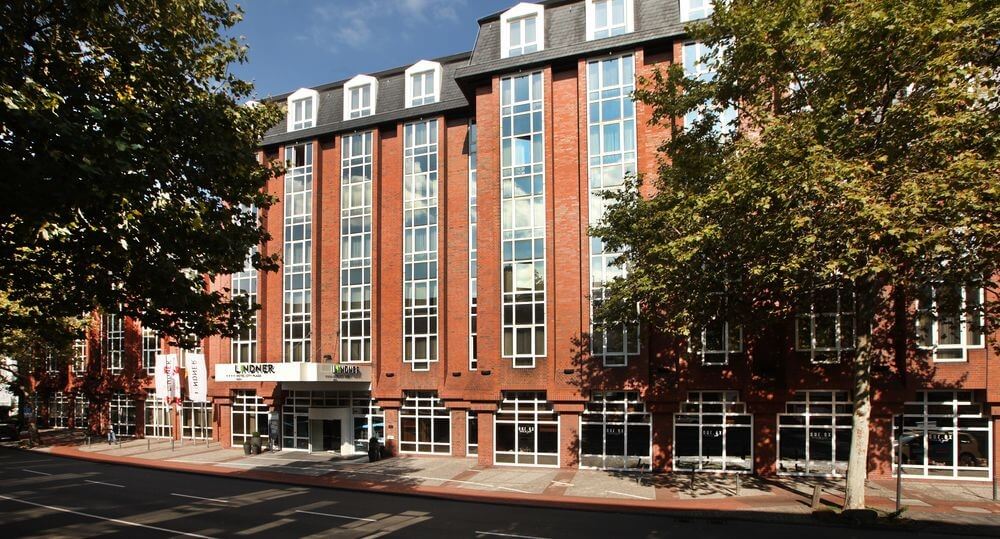 The event was held at the Lindner City Plaza in Cologne old town. Image credit: orbitz.com

The first day saw talks from electronics giant Miele, working in the connected home, followed by Hannes Ricklefs and Daniel Whaley of the BBC. They outlined the serious investment the BBC is making in artificial intelligence; the corporation already has one of the largest and most popular skills on Alexa. An interesting takeaway was the BBC's direction on personalisation - while they are looking for smarter ways to recommend content to their audience, they are actively steering away from hyperpersonalisation in favour of protecting the public conversation and 'breaking people out of their bubbles' to encourage opposing viewpoints and encourage engagement across society.

Another meta approach was presented by German public bank Frankfurter Sparkasse, who observed that the continuing progress of AI assistants and voice technologies could move us back to being an oral, rather than a literary culture, and the implications this has for education, inculturation, knowledge share and social memory. 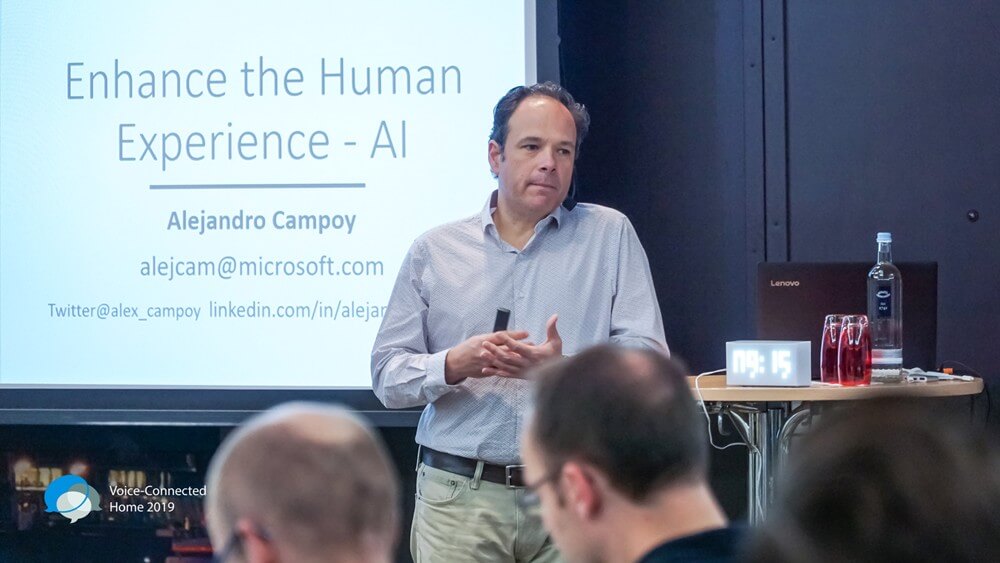 This was followed by BMW, who have foregone deep integration with the big assistants in favour of developing their own in-car assistant. Their Senior Content & Character Designer Marion Sardone talked through the heightened sensitivities around the security and reliability of an in-car assistant compared with in-home assistants, as well as the requirement to minimise distraction to drivers.  Marion discussed the scope of the assistant's capabilities, how the context and capabilities differ from general in-home assistants, and how BMW had approached infusing the carmakers brand into the assistant, with a key focus on bringing joy through the experience.

Following Marion was an excellent talk by Nicky Birch, Executive Producer within the BBC's R&D team, who oversaw the development of The Inspection Chamber, one of the first premium, voice-first narrative entertainment experiences available on Alexa. She talked through how the BBC approached voice development, both in the early days and ongoing, exploring how the BBC's output fitted with the platform, as well as what new experiences could be created specifically for the medium. Her talk was also packed with practical and actionable tips for creating experiences through a voice assistant. 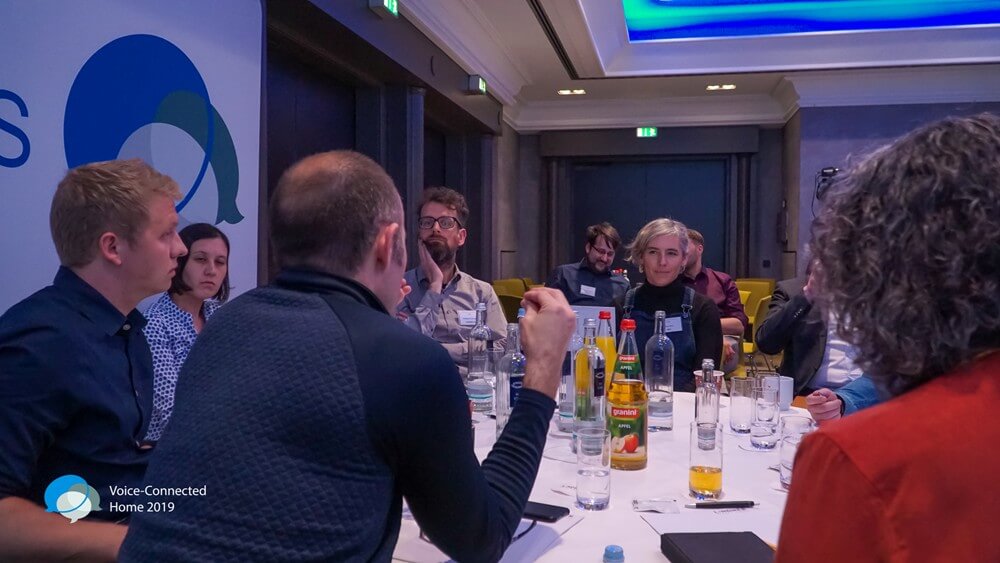 All the heavy-hitters in the assistant space were present at the conference, with Benjamin Dorvel of Google outlining how they designed the Google Assistant's personality. He talked through the process of creating a key set of global personality values, which were then augmented on a country-by-country basis to adapt the Assistant to each country's individual cultural norms. By way of example he showcased how the Assistant responded to being asked for a kiss in five different nations. While the American assistant responded with a more "prudish", blushing response, the British assistant cheekily said "snogging" wasn't one of its capabilities yet.

Marcus Nessler of Samsung also talked through the lessons the company had learned in the development and launch of Bixby, while Alejandro Campoy of Microsoft outlined how the tech giant's AI ethics guide and underpin their development routes.

Another fantastic talk wrapped up our conference; Lars Schalkwijk of Amp Sound Branding and Dr. Laura Dreessen of Denkwerk talked through their experience of developing an audio brand for their client Motel One. This was a fascinating perspective for us, as we frequently recommend to our voice clients to develop a sonic identity to deliver consistency across all conversational interfaces. Together they talked through the methodical process for gathering references, establishing contexts and themes, then developing a coherent range of sounds and idents for Motel One's room booking skill. 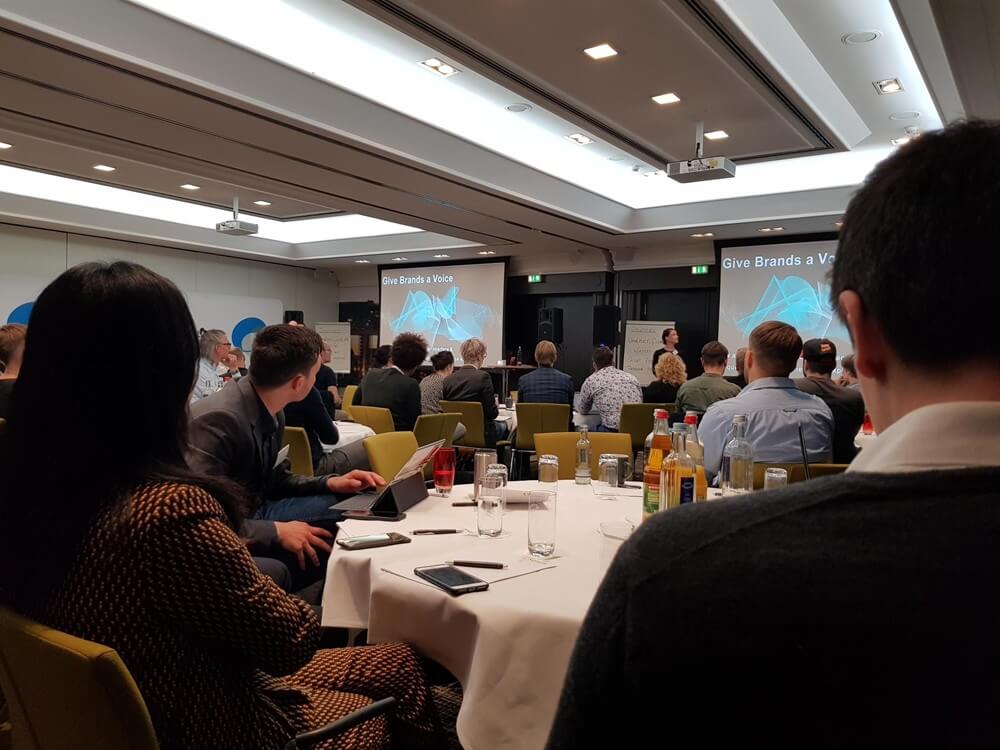 The conference was a great experience. It was great to hear see how other major brands and their suppliers were tackling voice experiences, the opportunities they had capitalised on, the challenges they faced, and their audiences' responses. It was fascinating to hear from international teams describe their experiences and the relative balance between each of the major voice platforms and the level to which this dictated the decisions they made and the direction they chose.

Although we never spoke at the event this year, we're keen to return to share our own knowledge and hear from the teams on how they continue to iterate and progress their and their clients' services through conversational interfaces.

If you're looking to explore voice interaction, or are looking for an experienced partner to take your ideas forward, we are one of only 14 Amazon-recommended voice development agencies in the UK, and have written extensively on the topic. Get in touch, and we'd love to chat about how we can support you.