Now that the Consumer Electronics Show 2020 has come to a close, we’ve rounded up our top picks from the year’s biggest technology showcase.

AI once again had a massive presence at CES. No longer a nice-to-have, it’s quickly finding itself in all corners of our lives, most noticeably in the form of voice assistants.

Google announced a host of new features that will roll out this year to its flagship Assistant. Webpage Reading allows the Assistant to read out web content in a natural tone, while Scheduled Actions gives users new higher level controls over their smarthomes, and users will now have more control over their privacy when interacting with the Assistant.

Alexa was also found throughout CES. Amazon announced partnerships with Lamborghini and Rivian to integrate Alexa into some of their upcoming luxury models, while vehicles without Alexa integration can use the aftermarket Echo Auto, which will have its international release this year, and will soon facilitate payments to Exxon and Mobile petrol stations as well.

Samsung’s big reveal was completely original digital avatars, capable of conversation and learning until they’re ‘indistinguishable’ from humans. Called NEONs, Samsung describes them as ‘artificial humans’, not smart assistants. Admittedly the demo was not very impressive, but it’s fascinating territory to explore — a different look at how our relationship with technology might evolve in the future.

OrCam, best known for its visual assistive product MyEye, announced two new AI-enabled devices for hearing impairment. The OrCam Hear uses AI to identify who is speaking, isolating the sound and playing it to a user through Bluetooth earphones or hearing aids. Also announced was the OrCam Read, a handheld device for reading written text, which the company says could be especially useful for those with dyslexia. 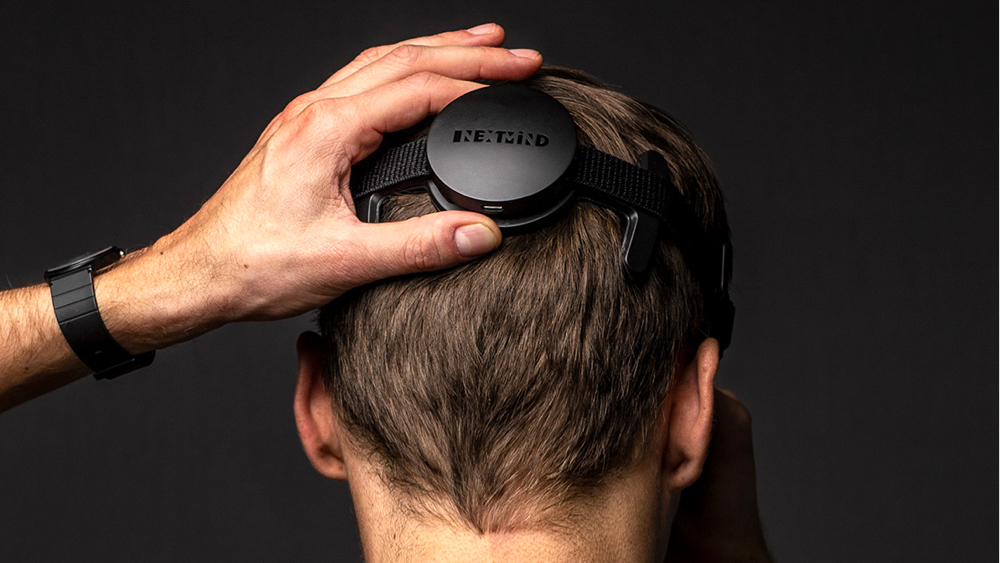 Nextmind's brain-computer interface was a hit at the show

This year also saw glimpses of new ways to interact with and experience technology. Follwing the nascent trend in mobile phones, Lenovo announced the world’s first foldable PC. Opening and closing like a book, they pitched a variety of use cases, from use as a tablet when entirely unfolded, to a more traditional laptop when paired with the Bluetooth keyboard, and partially folded to make use of two displays.

NextMind showcased a real-time brain-computer interface that translates signals from the visual cortex into digital commands. The demos allowed people to control a TV, shoot ducks in the classic game ‘Duck Hunt’ and change the light colour of a lamp, with the company also announcing a dev kit.

Looking Glass’ main offering was an 8K holographic display; a follow up to last year’s 4K version. Even though the technology is remarkable, there doesn’t appear to be many exceptional use cases at the moment. Still, the company is positioning itself within the enterprise and gaming industries.

Another entrant into innovative displays, Misapplied Sciences unveiled an interesting display capable of showing different images to different people at one time without the need for any other technology. Called parallel reality, Delta Airlines is planning to start using the displays within signage this year. 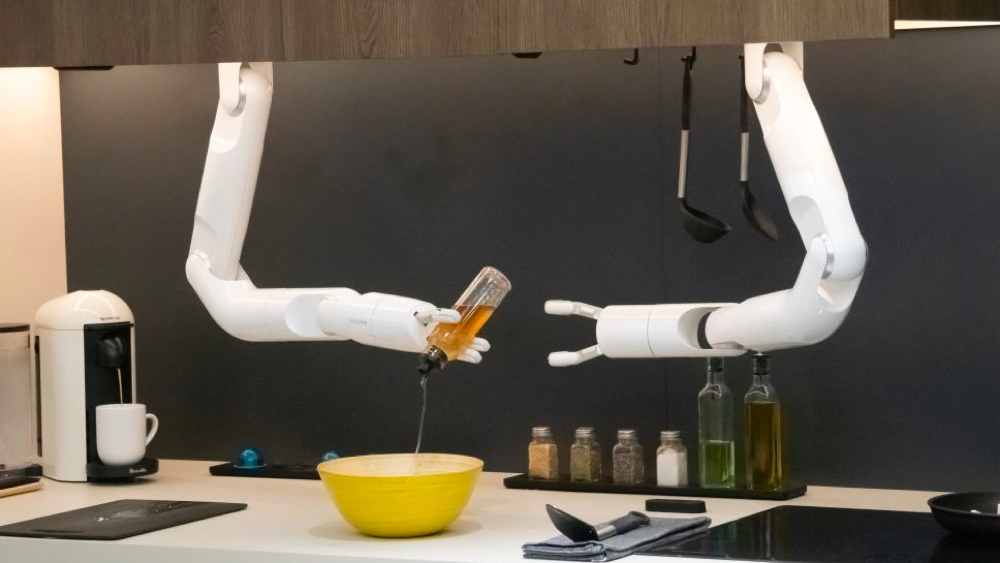 Samsung's robotic kitchen helper could fetch ingredients out of cupboards and cook up a meal, but didn't have a commercial timeline

This year it was clear technology continues to shape our homes but also our lifestyles, with new propositions in robotics, smart homes and CES’ endless stream of new tvs continuing apace.

Samsung unveiled a small ball-shaped robot designed to help you around the house - Ballie. Their marketing pitches it as an AI-backed security robot, fitness assistant, tool to help seniors connect with smart devices in their homes, and even a friend to your kids and pets.

Bot Chef was another of Samsung’s robotic offerings this year. Capable of interacting with appliances in a kitchen and even cooking a meal, the pitch wasn’t surrounded by much commercial messaging, suggesting Samsung still believes it has more work to do to develop the system and the niche it occupies.

As always there was a wide range of new virtual assistant integrations like TVs, showerheads and beds. 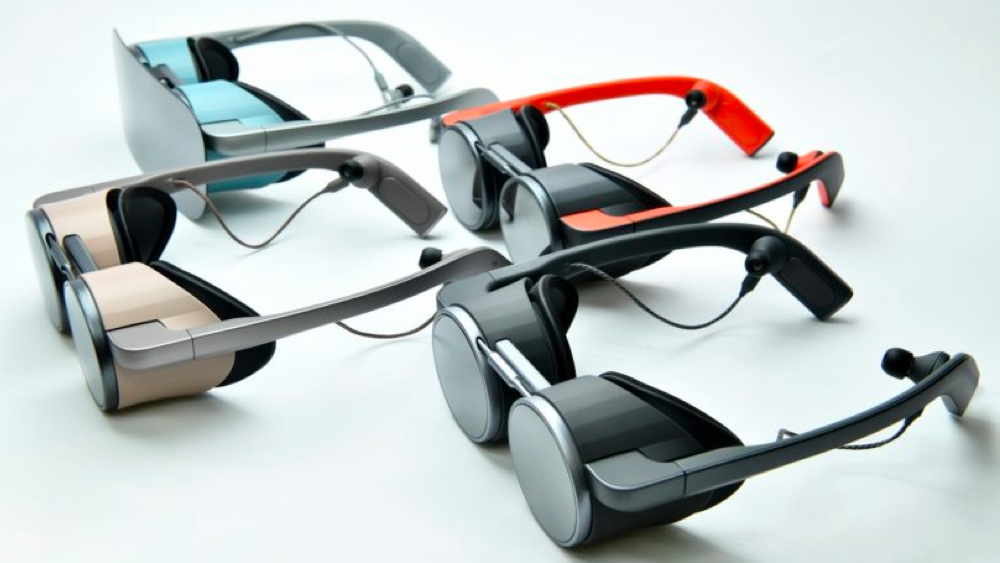 Panasonic's VR glasses have a smaller field of view compared with major competitors, but a massively more compact, and with a higher resolution

There didn’t seem to be any major breakthroughs being exhibited in augmented and virtual reality this year, rather the industry rolled out steady, incremental improvements to their tech.

Nreal announced new software which it claims lets users pin and use their regular Android apps in real space. They also continued to develop their lightweight AR glasses and plan on releasing them in spring 2020.

For its part Samsung unveiled a pair of AR glasses usable in tandem with their Gait Enhancing & Motivating System (GEMS) exoskeleton. These enable the wearer to pick a virtual workout location while a motivational trainer guides them through exercises, tracking their movement as they complete the activities, and giving feedback as they go.

One of the more interesting unveils were Panasonic’s VR glasses with micro OLED panels, which condense a functioning VR headset into a pretty compact, if steampunk-y, portable VR headset.

Hyundai and Uber announced a flying vehicle concept, along with a vision to use them as air-taxis within cities. Although there was no physical demo, they did allow CES attendees to take a virtual reality trip within the taxi to articulate their vision.

Among the microtransport products on offer, Segway unveiled the S-Pod; a Wall-E-esque self-balancing wheelchair designed to be driven in enclosed spaces such as airports, theme parks and work campuses.

Mercedes also turned some heads with their bizarre concept vehicle AVTR. This high-concept car aimed to tackle new ways of interacting with technology; the car has no steering wheel, and can identify the driver by their heartbeat and breathing. Among the more out-there additions to the vehicle are 33 bionic flaps on the back of the vehicle, which can subtly convey unspecified information to other cars on the road.

There’s plenty more we could say about CES. Every year the show features an immense range of new products and services outlining their creators’ visions for the future, from the serious and impactful to the downright weird and whacky.

Screenmedia is an innovation, design and technology practice. If you want to hear more on our thoughts of where emerging technologies will shape our future interactions with computers, get in touch and we’d love to chat.