What does AR mean for your business?

With the recent release of ARKit and ARCore, immersive augmented reality is sure to come to the masses. How can enterprises take advantage of it?

2018 is set to see augmented reality (AR) reach a wider audience with the recent releases of Apple’s ARKit and Google’s ARCore platforms, allowing designers and developers an easier route to implementing AR in their mobile apps. With the recent relaunch of Google Glass and mounting anticipation for mixed reality platforms Microsoft Hololens and Magic Leap, augmented reality is starting to make an impact with businesses looking not only for immersive consumer experiences, but streamlined workflows and boosted worker productivity.

Augmented reality overlays computer-generated graphics onto the real world, and it’s not a new idea. Weather reports and sports analysis shows on tv have been using live graphic overlays for years, while Pokemon Go and Snapchat’s Lenses feature have let people play with the tech themselves.

The driving force behind AR’s recent rise in interest is the improvements in smartphone processing power, better 3D imaging technology like Apple’s FaceID, better image recognition, and the development of ‘dead reckoning’ tech, allowing applications which no longer rely on recognising a pre-programmed ‘marker’ to understand what it’s looking at.

We’re expecting a lot of brands to start experimenting with AR this year, we’re even working with some already, and while the killer apps and widespread consumer familiarisation may not appear until the following year, here’s how organisations are looking to get ahead of the market in implementing the tech.

AR is still an industry in development, but the first commercial applications of it are starting to make an impact with major brands seizing the opportunity to create innovative solutions that add value to the user experience.

Visualising objects in the real world

One of the big advantages of AR is its ability to let people visualise objects in the real world. IKEA Place is one of the standout apps from Apple’s initial roster of ARKit-developed apps, allowing users to see how IKEA furniture would look in their living room, testing out the size, colour, and overall fit of the product in their living room or bedroom. Not only does this make buying furniture easy by removing the hassle of measuring and figuring out if it will fit and match the decor, it also includes a streamlined purchase process. Dulux also lets users virtually ‘paint’ their walls to help them choose colours, while another app lets users measure distances using nothing but their phone. The consumer benefits here are obvious; removing the guesswork and, critically, getting over that uncertainty hurdle. Visualisation also has a lot of opportunity in the media and entertainment spaces, such as Quartz allowing users to ‘see’ Cassini, the satellite that had been orbiting Saturn, delivering an altogether more immersive and engaging experience than a typical 2D display can offer.

The ability to overlay information into the real world has both enterprise and consumer-side benefits. Being able to see additional or contextual information overlaid into a user’s field of view saves them turning to reference materials, or another device, to look up context by themselves. Yelp released their pioneering Monocle concept app in 2009, allowing users to point their phone down a street and see all restaurants along that street complete with ratings and recommendations floating outside their doors.

In early 2017 Panasonic, in partnership with Renault, showcased a new form of AR heads up display (HUD) designed to help drivers by showing them key information such as, highlighting vehicles changing lanes, pedestrians, and what lanes go to which direction. For enterprises we’re also seeing concepts such as engineers being able to quickly identify what each component of a complex machine is even if it’s their first time working on that machine.

For enterprises one of the key benefits of AR is handsfree working. Google’s vision of AR got off to a rocky start - their Google Glass product was initially pitched to the consumer market and was met with ridicule, privacy concerns, and a sceptical market before being withdrawn from sale. Many thought Glass was a dead end, even those of us who had been excited by the non-consumer applications we thought the headsets offered, but two years later it reemerged with a new focus; enterprise. Google had quietly been working with a select group of partners to test out how organisation could use Glass to improve their business and announced their improved Enterprise Edition in 2017, complete with added voice control.

The applications here are truly transformative. Factory workers having instructions displayed directly in their field of vision, progressing through workflows using just their voice rather than having to turn away to a manual or screen-based terminal; automatic note taking allowed doctors to spend more time with their patients, and several enterprises reported shorter training times and increased worker productivity.

Although ARKit and ARCore make it easier to create AR experiences, it does still present unique challenges. While some AR applications use 2D overlays, the most immersive place 3D graphics into 3D environments. This creates both new challenges and new opportunities in developing interfaces for AR experiences. Some applications use ‘traditional’ UI elements to give users control over the experience, while others allow users to interact with objects within their real environment to control the experience. Each approach has its own merits in its own context, while others mix in additional interaction options like voice and gesture control.

Augmented reality delivered through headsets such as Google Glass, Vuzix, Hololens, or Meta have their own considerations too, where voice becomes an even more important part of the interface, for example allowing workers to move through a process without downing tools.

While opinion is still to consolidate around best practice, with the field being ripe for experimentation, it’s clear that AR has its own considerations and simply porting typical mobile or web interfaces will result in a subpar experience for users.

AR has the potential to be revolutionary, particularly in enterprise use cases. The last time we saw the mass adoption of a new method of interaction was the introduction of the touchscreen for mobile phones over ten years ago. ARKit and ARCore are already setting digital industries up to develop new and immersive experiences, while we’re already playing with the new Google Glass Enterprise Edition in our studios, and are developing consumer and enterprise-facing concepts for mobile to delight end users.

For Screenmedia and our clients, it’s back into our Lab, where we have been toying with AR for the past few months. Watch this space. 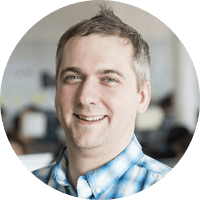