The future of online shopping: how chatbots, AR, and voice are disrupting ecommerce

As emerging technologies gain mainstream recognition, retail businesses must learn to embrace new technologies if they want to keep their competitive edge.

There is no question that the emergence of ecommerce and digital retail platforms have fundamentally changed the face of retail over the last 20 years. New businesses like Amazon saw the internet as an opportunity to reach millions of customers and achieve exponential growth, and what had started off as a small online business selling books is now the 3rd largest company in the world. Blockbuster on the other hand failed to understand the potential, leading to their eventual collapse and allowing more innovative rivals like Netflix to take the lead.

Today a collection of new emerging technologies - such as voice, augmented reality (AR), and chatbots - promise to bring about similar disruption to ecommerce in the near future. As these technologies continue to grow at an exponential rate, businesses must ask themselves if they will adapt, or stand still to be disrupted.

In this lab item, we look at examples of how some ecommerce companies are successfully adapting through the use of newly available technologies and tools.

Enhancing the buyer journey through AR

Augmented reality, the ability to let people visualise objects in the real world by overlaying computer-generated graphics into their field of vision, has seen major developments in the past year. The release of Apple’s ARKit and Google’s ARCore developer kits has cut the cost and learning curve for retailers seeking to innovate, and has resulted in a raft of new prototypes aiming to overcome one of the biggest challenges of online retail - not being able to fully visualise a product before it turns up on the doorstep.

An early stand out from the line-up of AR apps is IKEA Place, which allows users to see how IKEA furniture would look in their home, and test out the size, colour, and overall fit. The app includes a streamlined purchase process, making it easy to buy online in a market which has been slow to embrace online shopping. The app remains one of the most downloaded AR apps, and its success has spawned a number of copycats launched by rivals.

Nike worked with Snapchat on a promotional campaign for a new sneaker launch - the Air Jordan III Tinker. Using AR within the app, users were able to see basketball legend Michael Jordan hovering mid-shot from his famous 1988 NBA All-Star Dunk Contest free-throw line dunk, superimposed into their real-life surroundings. By walking around Jordan, users saw the player’s outfit change, introducing the new shoes which users could then purchase through Snapchat’s new in-app store. The success of the campaign was staggering, with the shoes selling out within 23 minutes.

Visualising clothes and makeup has always been a challenge for online fashion retailers, which is one of the key reasons they have emerged as keen experimenters with AR. Sephora launched their own AR app, the Sephora Virtual Kit, allowing users to virtually experiment with makeup on their own faces and offering tutorials on application methods. In the same vein, clothing retailers Gap and Uniqlo are also using AR to experiment with allowing users to project products directly onto their own bodies to understand size and fit, with Gap unveiling an app to let users ‘try on’ clothes at home, while Uniqlo opted for even more innovative smart mirrors to achieve the same effect.

What AR means for ecommerce

With 35% of consumers indicating that they would shop more online if they could interact with products virtually, AR has the potential to drastically improve the online purchasing journey by overcoming the challenges of matching an in-store experience online. As AR becomes more mainstream, and the tools for developing with it become more accessible, brands are rushing to explore how it can make an impact on their own businesses. While the likes of IKEA have spawned a raft of copycat apps from competitors, first-mover advantage has become a clear differentiator in developing with augmented reality. As an emerging technology, it has a huge scope to delight customers and exceed expectations, while also delivering impactful commercial results.

Personalised support in the buyer journey with chatbots

Chatbots have repeatedly shown their value in improving customer support experience, but they can be much more than just another tool for customer support. With studies showing customers are willing to spend up to $400 on products when using a chatbot, more and more businesses are investing in and releasing chatbots of their own to great success.

In 2012 US rail network Amtrak started working on a chatbot called Julie to handle online ticket purchases and general customer support. With their website receiving over 375,000 daily visitors, Amtrak were keen to reduce the time spent on FAQ customer support and expedite the purchasing journey. The benefits Julie brought about were impressive; Amtrak saw a 25% increase in bookings, a 30% increase in revenue per booking, and an 800% ROI with $1m saved in customer support in just one year.

In 2015 clothing retailer The North Face partnered with IBM to use their artificial intelligence Watson to improve the buyer journey on their website with a chatbot. By asking customers where they’re going, when they’re going, and what activities they’ll be participating in while wearing The North Face clothing, the chatbot generates a list of products that match customers’ needs and tastes. Of the 50,000 people who engaged with the chatbot 75% said they would use it again, and The North Face saw a 60% click-through rate on the recommendations made. If you’re planning a trip somewhere, you can try out the chatbot yourself here. 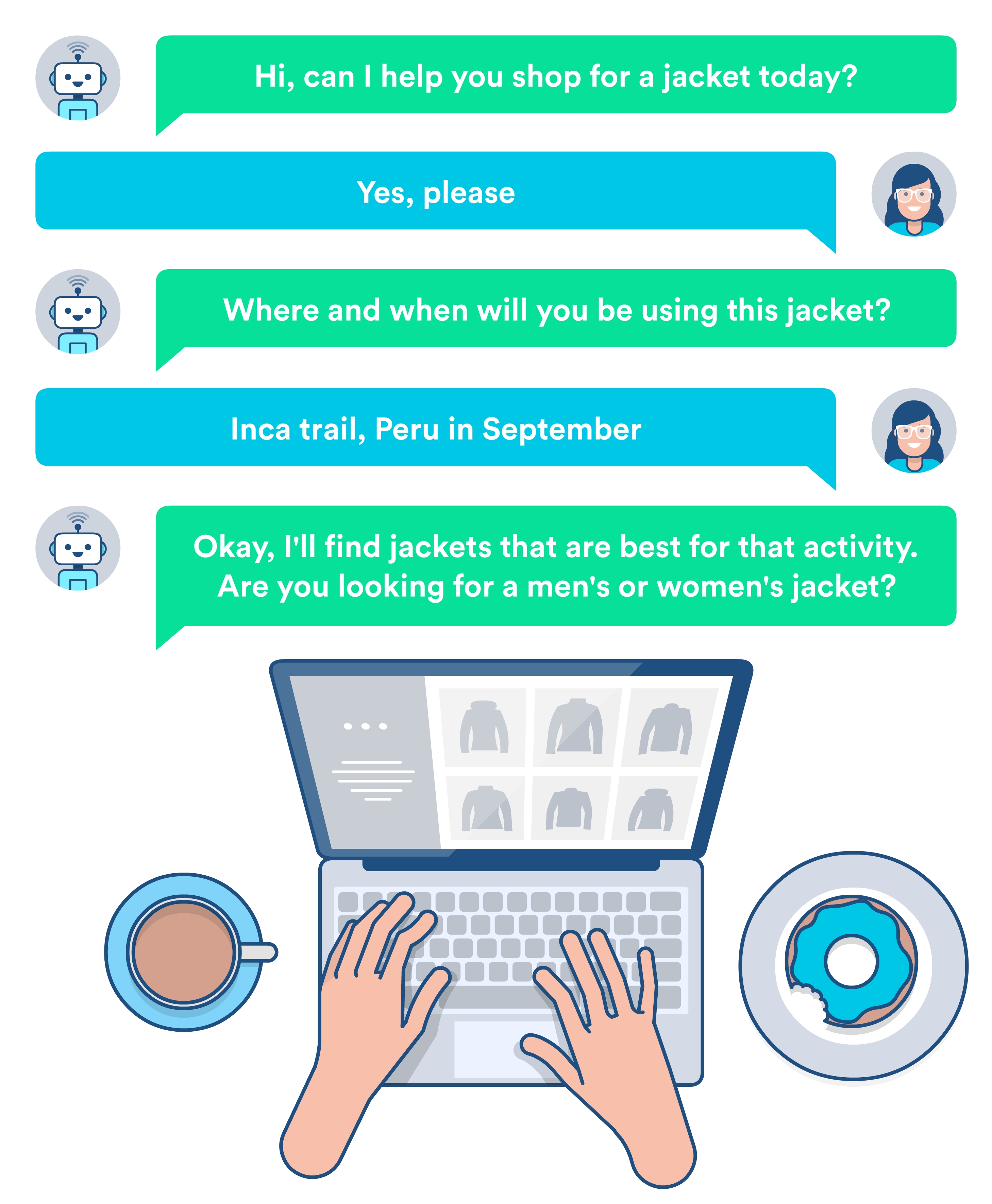 88% of 1-800-Flowers sales are through their website. Like The North Face, 1-800-Flowers partnered with IBM for their new chatbot GWYN to give users a more personal experience in finding the perfect gift. GWYN also remembers users and improves its results the more they engage with it. Following the introduction of Facebook Messenger-based chatbots, 1-800-Flowers also introduced their own to the platform, which has been named Mark Zuckerberg’s favourite chatbot due to its usefulness and reliability. Just two months after launch, 1-800-Flowers reported 70% of chatbot orders were coming from brand new customers.

eBay released a Messenger-based chatbot called ShopBot in October 2016, aiming to improve both retention and engagement from their customers. ShopBot remembers user preferences and analyses previous searches and purchases, allowing it to go beyond typical recommendation algorithms; it can even learn what brands and colours customers prefer. For example, if it sees a user regularly buys or views Adidas products but always ignores Nike, ShopBot will understand which brand the user prefers and tailors its results accordingly. Added image recognition also allows ShopBot to analyse images of products bought and recommend other similar products. While eBay has yet to release commercial statistics, they have noted that customers using the chatbot are three times more likely to ask questions about products rather than browsing the website, suggesting their initial goal of improving retention and engagement has been achieved.

What chatbots mean for ecommerce

By humanising a brand’s digital presence through a friendly persona, chatbots go some way to add the personal touch of in-store staff to the digital ecommerce experience. Bolstered by extensive and improving abilities to remember user conversations, extrapolate user preferences, and curate improved recommendations from across an entire product catalogue; chatbots are well placed to help users cut through the noise of an increasingly competitive ecommerce landscape and bring life to an often routine purchasing experience.

Voice devices like the Amazon Echo are selling at a faster rate than that of the iPhone when it first launched; in 2017 alone the voice market saw an increase in sales of 300% and is already beginning to disrupt a number of industries. As lacking a visual display makes browsing products tricky, the initial roster of voice skills from retailers focus either on rapid repurchasing of products initially purchased through other channels, or engaging brand experiences which then push calls to action to other channels. Brands which are able to provide omnichannel purchase experiences and options to match customer demands for convenience and availability are seeing promising early results with voice.

Perry Ellis recently released an Alexa skill offering fashion advice aimed at male customers who need help when going to specific events (for example, a beach wedding). After consultation, the skill then sends results by email to allow customers to review suggested items and continue the purchase journey on the Perry Ellis website. This application of voice has been well received by their targeted audience, and plays on the opportunity of helping men choose their outfit for an event or occasion and extends it naturally into the voice space by having Alexa act as a personal shopper while still following up with commercial messaging.

US detergent brand Tide was one of the earliest household brands to experiment with Alexa when they unveiled a “Stain Remover” skill with over 200 stain treatment guides. By taking advantage of a lack of competitor presence, a curious Echo user base, and strong media interest in the platform; Tide became a go-to skill for new Echo owners, not only capitalising on media and consumer interest, but offering a valuable experience for Echo owners. Similarly, food brand Campbell’s became the first to offer recipes through an Alexa skill, leveraging the assistant’s ability to overcome choice paralysis in choosing what to eat for dinner. The imminent arrival of implicit invocations on Alexa and Google Assistant stands to enhance these benefits; for example, by asking Alexa what to eat for dinner, the assistant would recommend Campbell’s skill to help find a recipe, solidifying their place as experts in their respective industries.

What voice means for ecommerce

Established user behaviours are hard to change, but brands are finding ways to offer greater convenience and experience through voice to win new and existing customers over. A customer won’t buy a product via a smart speaker unless it is faster, easier, or better to do so than through a chatbot, app, or website. The ecommerce businesses reaping the greatest rewards from voice interfaces are the ones who have recognised this behavioural bias and are offering unique content over and above what their other digital offerings can effectively provide.

Chatbots, AR, and voice are still emerging technologies, but ones which are already demonstrating real commercial impact to businesses. The brands finding the greatest success are those invested in understanding and exploring what makes each technology so attractive to consumers and capitalising on it, rather than seeing them merely as another channel through which to sell to their audiences. Businesses that are slow to change will see themselves falling behind in much the same way as those that failed to recognise the impact the internet or the mobile phone would have across industries, leading to smaller businesses to take over, such as Uber in the transport industry and Amazon in retail.

For Screenmedia and our clients, it’s back to the lab where we’ve been exploring and developing the use cases to come in the world of ecommerce. If you're looking for more than just words, get in touch to see how we can help you out with your next project. 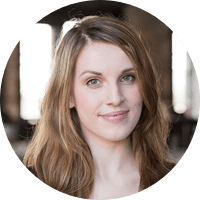